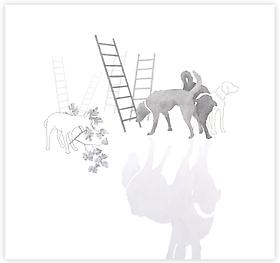 It’s a sunny Tuesday, and Ella the borrowed dog is singing from the back of the car.

I’m surprised by this. I didn’t think she was very interested in mid-period Peter Gabriel songs. Then again, we are only a couple of miles away from Gabriel’s house. She must be singing her thoughts aloud.

It’s only natural for dogs to sing when they’re excited, but Ella’s growly howling is putting me off my driving, and I ask her to shut up.

“I don’t like that song anyway,” she mutters. “Frankly, So was where it all went downhill.”

You don’t really mean that, Ella. Everybody likes So.

We’re driving towards the Wiltshire village of Box, which is famous for two things: Box Tunnel and Real World Studios. I want to look at the tunnel, and poke my nose around the studios. Ella is coming with me, mainly because she has no choice, but partly because she prefers early Genesis and wishes to voice her prog-rock opinions. That, and chase sticks.

Ella’s eager to argue her point. “To be quite honest,” she growls, “it started going downhill even earlier than So. Just after “Games Without Frontiers,” I’d say.”

You’re wrong, I tell her. I saw him perform So live, complete with Kate Bush herself to sing the “Don’t Give Up” bits. It was unforgettable.

“Tell me about it, then,” says Ella as I park the car on a random Box street.

All right then. I will.


Box, population 3,500-ish, sits astride a busy road and a busy railway line. It lurks up and down a hillside. At first sight, it doesn’t seem like a very inspiring place to live. Even if you love railways and trains, or hillsides.

We set off by following Ella’s nose through the village’s quieter alleyways. The path soon reaches the river—more of an enthusiastic stream, if we’re honest—and a pretty bridge leading to pastures and the smell of cattle. Ella scavenges for edible things, sniffing and snuffling her way uphill, northwards, away from the village.

““Carpet Crawlers,” she says, out of the blue.

“It was just a great Genesis song,” she says. “The original, I mean. Not that cooked-up version they did for their Turn It On Again album in—oh, when was it? 1999? That time when Gabriel got back together with the rest of them, and all they could manage was a pop-ified version of ‘Carpet Crawlers.’”

I quite liked that version.

“Well of course,” she sniffs. “But you liked So. You’re pop, not prog. You were too young for prog. And you were too ordinary, too normal, too middle-of-the-road to appreciate it even when you grew up. Prog’s not for people like you. It requires a certain frame of mind.”

Dogs like prog, she declares. We can dance to prog, because generally speaking, we can’t dance at all.I suppose she’s right. I was around for progressive rock, but too young to appreciate it. My first experiences in prog were the sounds of prog artists growing out of prog, and moving into new areas. Berlin-era Bowie. Post-Eno Roxy Music. Post-Roxy Music Eno. Genesis had done all their prog by the time I was old enough to be interested in music. The first Genesis I could really get my teeth into was Duke—prog in intent, but most certainly pop in sound.

Halfway up the hillside, we reach a vantage point. We pause. I munch some nuts I brought with me. Ella gives me that look that dogs do when humans eat food, but don’t offer them any.

“What about that gig then? Gabriel in concert?” she asks.

It was the So promotional tour. Massive. A huge venue in London. I was only about 16, it was my first stadium-sized gig. There were two enormous lighting rigs on wheels, like arms with fists of lights. They moved around the stage, following Gabriel, lighting him up in weird ways. Kate Bush came on to sing her bit and the two of them hugged, just like they did in the video. Everyone went wild. The tour program was a printed work of art. I should have kept it. Afterwards, I spent a couple of years as a complete Gabriel obsessive, buying all his older albums. That, and growing up with new wave and post-punk, cemented my pop tastes forever. I tried the older Genesis stuff and just found it hard to get along with. So I ignored it.

The wind rustles our faces. We stare out over the valley below.

“Why did we come here again?” Ella asks.

I wanted to show you that, I reply, pointing down.

Below us, emerging from the hill, is the Box Tunnel, a hidden masterpiece by Victorian Britain’s greatest engineer, Isambard Kingdom Brunel. He built it between between 1836 and 1841. Legend says the sun shines straight through it at sunset on Brunel’s birthday, April 9th.

The tunnel was a central point along Brunel’s Great Western Railway, linking London to the cities of Bath, Bristol, and Exeter. For a while it was the longest railway tunnel in the world, and just one of Brunel’s astonishing list of achievements. Brunel built huge railway stations and pioneered atmospheric railways powered by air pressure. He built great bridges, viaducts, museums and hospitals. Oh, and some of history’s biggest ships, like the early trans-Atlantic steam pioneer also named Great Western. Everything was built on an enormous scale, at great expense and with great risk. Brunel was the ultimate Victorian hacker; he practically invented steampunk.

From where we’re standing, we can look down at the tunnel’s westernmost portal, finely dressed Bath stone forming a stately arch. This is architecture the way Brunel intended it: smart, proper, expensive. Cheap architecture wasn’t going to get him into the history books, and wouldn’t lead to a career change into the shipbuilding business.

Ella nags me from down by my ankles.

“It’s a nice enough tunnel,” she remarks, “but I prefer his bridges, myself.”

We turn our backs on Brunel, and climb further uphill.


Ella turns to the subject of Steve Hackett.

“Him and Rutherford totally nailed the dual-guitar prog sound,” she argues, sniffing random things in hedges as she goes along.

“And while Gabriel was prancing around at the front in his chicken suit, or whatever else he fancied wearing that evening, the band was behind him doing the real work. They were amazing musicians. Listen to Foxtrot or Selling England by the Pound. It’s so. Well. It’s so intricate. There’s so much to listen to. You should try it in headphones.”

I bet you’ve never tried it in headphones.

“Well I wanted to, but the headphones were very tempting and quite chewy, and I just got a bit carried away.”

Anyway, I say, that early sound was unsustainable. They had to get round to having songs with choruses in them sooner or later. Maybe if they’d done that sooner, they’d have stuck together for longer.

This is very weak reasoning on my part, and Ella knows it.

“Bosh,” she says, as if she were a child who’s been dragged to Narnia by magic. “The stuff with choruses in it just isn’t as interesting. It’s so predictable.”

I look up at the windows of the huge mill building. A television set could come flying out of one at any moment.But the predictability is part of the pop magic. Something you can remember, something you can sing along to. Have you tried singing along to “Can-utility and the Coastliners?” I can’t even pronounce it. Listening to that stuff is such hard work.

We’ve walked across the top of the hill and down the eastern-facing flank. Here there’s a lane that winds across a narrow bridge back into Box. Either side of the bridge there are buildings. One looks like an old wartime aircraft hanger, the other resembles an old mill converted into a recording studio of international renown. This is it, Peter Gabriel’s Real World Studios, right in front of us.

Like a lot of old mills, Real World sits astride a collection of little streamlets, some of them man-made, or diverted from their original course. The footpath follows one of these, glistening with bright green reeds, curving round the edge of the grounds. Through a beech hedge you can see the recording studio, famously designed with big windows overlooking a pond. We’re so close to rock stars, we can almost stalk them.

Despite herself, Ella’s looking interested, sniffing frantically in the undergrowth and running from scent to scent, her nose in charge and her tail flicked upwards in delight. She says it’s the streamlets, and the prospect of jumping all-four-feet-first into water. She loves doing that. But I think that even though she doesn’t like Peter Gabriel’s solo stuff, even she is feeling a little star-struck.

Peter Gabriel might be in there right now, I say, pointing through the beech hedge to the buildings beyond. He might be fiddling with his Mac, or tinkering on a piano. Perhaps there are some of his rock-star pals hanging around.

I look up at the windows of the huge mill building. A television set could come flying out of one at any moment.

We explore the footpath as it winds through a tiny pretty woodland and out into fields beyond.

Think of the feet that have trod this path, I say. New Order recorded Technique here, and that’s one of the best albums ever. Maybe they came out here, along this very footpath, for a break after they’d finished “Run” or “Vanishing Point.” Kylie Minogue has been here. And Shirley Bassey. And Oasis.

Ella dumps a stick at my feet. “Look. Early Genesis was amazing,” she says. “They created worlds, and stories, and amazing musical landscapes. Discovering choruses made it all sound blander. The stories were gone.”

I refrain from throwing the stick and give her a pointed look.

Ella wags her tail just a tiny bit, and gives me those big brown Labrador eyes.

“I’m hungry,” she declares. She always changes the subject when she can’t argue back. Or when she really is hungry.

We turn round, back past Real World, past Peter Gabriel’s empire of So and Us.

Ella leads me underneath the railway (another smart, correct, Brunellian arch), and we walk back into the village, back to our random parking spot.

“Oh you know. A bit of Yes. A bit of ELP. Some Marillion. Lots of dogs are into it.”

“Dogs like prog,” she declares. “There’s the whole dog-prog rhyming thing, obviously. And the changes of tempo and mood—very doglike. We can dance to prog, because generally speaking, we can’t dance at all. And few of us have much of a sense of rhythm.”

Ella investigates a puddle and sneezes, snorting a little fountain of water over her face. She looks up at me, muddy, wet, and contented.

“That was a fun walk. But I’m still hungry.”