Amy Park at The Gallatin Galleries

"All the arguments against it are right: too crowded, too loud, too spread out, too expensive. But also: too exciting, too energetic, too fast, too much. All superlatives. New York, I love You, But… is a glimpse at the superlative that is New York, an audience to the internal conversation of the person pressed against the subway door, smelling something unidentifiable on the journey home from some unique, strange wonderful New York moment. It is a glance at the instances of excess and intimacy, humanity and wonder that define being a New Yorker."

Amy Park’s large-scale watercolors illuminate the artistry of modern architecture with crisp blocks of color and mesmerizing detail. Inspired by the forms and patterns found in the New York cityscape, Amy works from her own photographs of major landmarks and skyscrapers to create hard, geometric compositions that border abstraction. Bringing color and light to an often muted subject matter, Amy highlights the sculptural qualities of these buildings with a skill and control that defies the usual limitations of the medium. 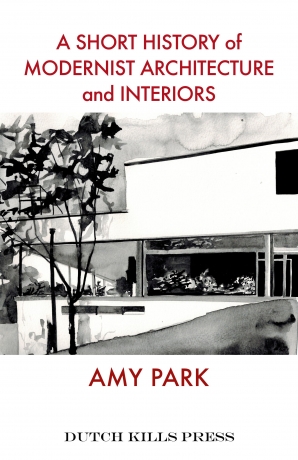 A Short History of Modernist Architecture and Interiors

"Amy Park’s visual art has long reflected a deep interest in architecture. This collection of 36 ink drawings is her own idiosyncratic survey of the highlights of Modernism. It’s a fresh, spontaneous approach that will help you see Modernism with new eyes."